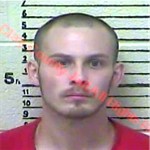 Clay County, Ky. - A Manchester man has been charged with murder by the Clay County Sheriff’s Office after what is being called a domestic dispute.

Isaiah Stidham age 21 of Manchester, KY was taken into custody Thursday afternoon after sheriff's deputies were dispatched to a stabbing/shooting incident in the Big Creek area of Clay County.

The victim has been identified as Sherry Collins Joseph age 32, of South Highway 421, shot multiple times by her male friend, Isaiah Stidham, after an argument between the two at his home on Miller Road in Big Creek, KY.

The victim has been sent to the State Medical Examiners Office.

The Clay County Sheriff's Office is leading the investigation.

According to WYMT TV, investigators say Stidham faked cut marks on his arm to make it look like there was a struggle and Clay County Sheriff Kevin Johnson says he later confessed to the crime.

Isaiah Stidham is lodged in the Clay County Detention Center.

Photo of the accused courtesy of the Clay County Detention Center.