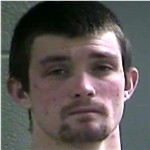 The arrest occurred at Walmart near Corbin in southern Laurel County after Sgt. Grimes was dispatched to a shoplifting complaint there. When Sgt. Grimes arrived and conducted an investigation, he learned that this subject had allegedly been observed attempting to unlawfully removed $35 in items from the store without paying.

In addition, Sgt. Grimes determined that this subject was wanted on a Whitley County bench warrant of arrest for contempt of court – failed to report for drug court assessment regarding charges of trafficking in a controlled substance – first-degree – first offense, possession of controlled substance first-degree first offense, and possession of marijuana.