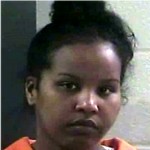 The arrest occurred at Walmart near Corbin in southern Laurel County after Walmart's loss prevention team detained this subject. When Deputy Gray arrived at the scene and conducted an investigation, he learned that this subject had allegedly been observed concealing store merchandise and attempting to leave the store without paying for the items total value of $85.

In addition, Deputy Gray learned that this subject had been banned from Walmart stores because of previous arrests. This subject allegedly was also huffing paint and hairspray inside the store.

Also, this subject was wanted on a Hardin County bench warrant of arrest for failure to appear in court on a charge of public intoxication – controlled substances. This subject was also arrested on a Jefferson County warrant of arrest obtained by a detective with Louisville Metro Police Department charging theft by unlawful taking -- shoplifting -- on a theft that allegedly occurred at a Rite Store in Louisville.

This subject was lodged in the Laurel County Detention Center.

Photo of the accused courtesy of the Laurel County Detention Center.