WASHINGTON, D.C. – U.S. Senate Majority Leader Mitch McConnell made the following remarks on the Senate floor Thursday regarding the deaths of Stephanie and Justin Shults during the terrorist attacks in Brussels: 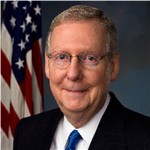 “I was deeply saddened by the death of Lexington, Kentucky native Stephanie Moore Shults, 29, who, along with her husband Justin Shults, 30, was killed in the terrorist attacks in Brussels last month. Funeral services for the young couple will be held in Lexington tomorrow.

“Stephanie Shults graduated from Bryan Station High School and Transylvania University, looking forward to the promising future ahead of her. She found part of that future when she met Justin, a native of Tennessee, at Vanderbilt University where the two earned their master’s in accounting.

“The pair moved to Brussels in 2014 for work and loved to travel extensively through Europe. They recently visited Barcelona. They were planning a future trip to Finland, where they hoped to stay in a glass igloo under the Northern Lights.

“Now that spirit of adventure is gone: stolen by a brutal act of terror that targeted the innocent.

“My wife Elaine and I join all Kentuckians in sending our deepest condolences to the families and loved ones of this young couple. We share their heartbreak over the fact that Stephanie and Justin were taken from us too soon. And we extend our prayers and sympathies to all the families who lost loved ones in Belgium.

“Attacks like these remind Americans everywhere that we must defeat ISIL and other terrorist groups who not only threaten our interests but, critically, innocent civilians. So today we honor the lives of Stephanie and Justin. We mourn their loss. And we rededicate ourselves to our important fight against terror.”