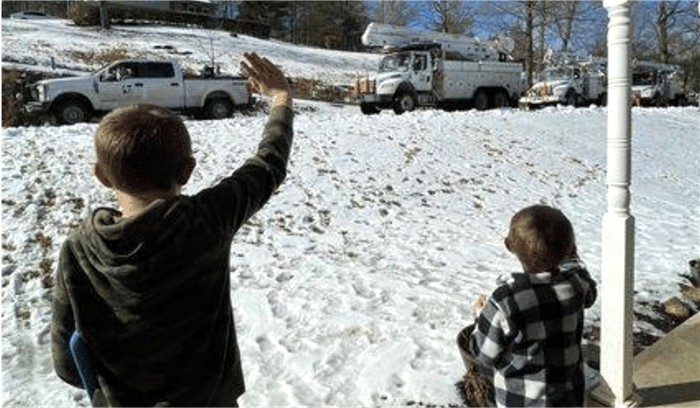 By Joe Arnold, VP of Strategic Communications for the Kentucky Electric Cooperatives

Imagine scaling a 40 foot ice-covered utility pole to perform highly technical and physically demanding tasks in a dangerous environment knowing that countless people were depending on you.

That’s a typical moment for the heroic electric cooperative line technicians who worked double shifts for weeks to restore power after ice storms devastated the electric infrastructure in much of Kentucky. More than 100,000 co-op consumer-members lost power at the height of the storms in mid-February.

Over an eight-day period, a large portion of the Commonwealth sustained a relentless assault of ice and snow with back-to-back-to-back winter storms. Two rounds of crippling ice were followed by heavy snow; then just as power restoration was complete, disastrous flooding struck Kentucky.

Natural disasters like this require determination and resilience, and thankfully electric cooperatives are blessed with a linemen corps who are committed to restoring power and keeping everyone safe.

Because electric cooperatives are led and owned by the people they serve, many of the local crews who responded to this crisis restored power to others while their own homes were still without electric service.

Meanwhile, more than 425 mutual aid electric cooperative line technicians from other co-ops joined the recovery effort. Not only did other co-ops in Kentucky dispatch crews and equipment to the disaster area, but co-op crews from Georgia, Alabama, Indiana, Virginia and Tennessee bolstered power restoration. In all, more than 1,000 people worked more than 300,000 hours to restore power.

Even as sleet, ice and tree branches fell all around them, linemen exhibited uncommon resolve and professionalism to help Kentuckians suffering in the extreme cold. The day after Licking Valley RECC lineman Scott Spencer was seriously injured while restoring power, he took to social media from his hospital bed to encourage his colleagues to press on and be safe.

These crews didn’t just repair the electric infrastructure, in many cases, they had to rebuild an electrical system that took decades to construct. Preliminary reports indicate at least 500 utility poles were broken by the tremendous weight of the ice and snow. Because electric cooperatives serve the last mile in the most remote and rural areas of Kentucky, much of the damaged area was not accessible by road. Crews had to use ATV’s, track machines, drones and hikes through debris and snow to reach damaged areas.

Agencies, county and state crews, the Kentucky National Guard and local governments stepped up to serve during this crisis. Kentucky-based United Utility Supply made sure that co-ops had all the materials they needed to restore power as quickly as possible.

Despite one of the worst disasters Kentucky co-ops have ever seen, co-op crews exhibited and received the best of Kentucky. Co-op consumer-members greeted them with hot coffee and warm smiles. Local churches and volunteers kept them well fed and appreciated. Children made signs and waved to crews from their front porches as bucket trucks labored through the ice and snow. Neighbors being neighbors the Kentucky way.

While the linemen have done their job, it’s now our job to say thank you. It’s the cooperative way.