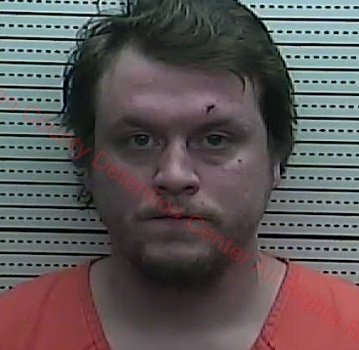 Baxter, KY. (December 14, 2019) – 0n December 13, 2019 at approximately 4:25 A.M. Kentucky State Police, Post 10 Harlan received a call of a shooting incident at a residence on KY 840 in the Baxter community of Harlan County. Trooper Aaron Caldwell responded to the scene.

Detective Jim T. Whitaker and Detective William Howard responded to Harlan ARH to conduct an investigation. During the investigation, it was determined multiple rounds of gunfire occurred outside the residence on Ky 840 resulting in Hopkins being shot in the head. It was also determined the male subject responsible for the shooting was James T. Mitchell, 23 years of old of Coldiron Ky.

Mr. Mitchell was located at his mother's residence off Bradford Loop in the Coldiron community of Harlan county. Mr. Mitchell was detained at the residence and then transported to KSP Post 10 Harlan for questioning.

Mr. Mitchell was arrested for:

He was lodged into the Harlan County Detention Center. Case is under investigation by Detective Jim T. Whitaker.

Photo is courtesy of the Harlan County Detention Center.