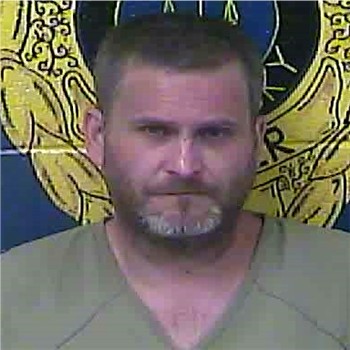 MANCHESTER, KY (October 22, 2020) - The Manchester Police Department is reporting that: On Thursday, October 22, 2020 at around 1:00 AM, Manchester police officer Wes Wolfe, K-9 handler Ryan Jackson and Sgt. Jeff Couch were patrolling the Governors Campground on Beech Creek when a subject on an ATV was observed driving on Beech Creek Road coming from the lake area.

Officer Wolfe activated his emergency equipment in a attempt to conduct a traffic stop on the ATV but the subject (later identified as Rodney Wombles age 40 of Manchester) refused to stop and continued traveling on Beech Creek Road towards Sutton Branch.

The subject made a left turn onto Samples Branch Road and entered a field and took off running on foot. Officers then began a foot pursuit and K-9 Officer Ryan Jackson activated K-9 Zeus.

The subject was tracked up a valley and was located by Zeus hiding in the brush and leaves. After a brief struggle, he was placed in custody without further incident.

Officer’s ran the subject's information through Clay 911 and learned he had an outstanding warrant out of Clay County.

While searching the subject, Officer’s located two counterfeit $100 bills in his possession.

Rodney Wombles was charged with: