The arrest occurred in London following an investigation conducted by Laurel County Sheriff's investigators after the discovery of a female subject found bound on a mattress in a back bedroom of a residence off Amelia Drive, approximately 3 miles west of London. 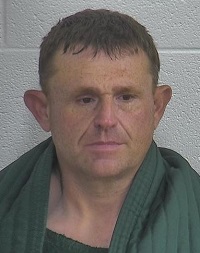 Allegedly the accused bound the female victim and the next day found her deceased and covered her body in items from around the residence in an attempt to hide it.

Scott Edward Pressley (right), the resident of the home where the victim was found, was charged with:

An autopsy will be conducted in Frankfort on Tuesday for positive identification on the victim and to assist on determining the cause of death.

Assisting on the investigation for the Laurel County Sheriff's office were:

Laurel County Sheriff's Lieut. Chris Edwards who is the case officer reports that the investigation is continuing.

UPDATE: Victim in Murder Investigation Identified as a Person Reported as Missing in Laurel County, Kentucky