McConnell: "Time for Hard Truths and Accountability" on Afghanistan 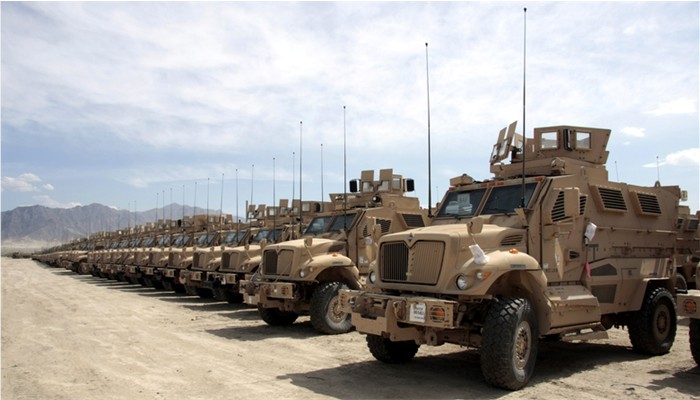 Before U.S. withdrawal - Rows of Mine Resistant Ambush Protected Vehicles are staged to be issued to units in Afghanistan (Stock photo by Jason Schulz) 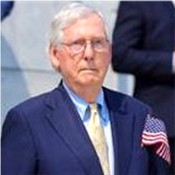 "Providing for the common defense. Protecting the American people. It's one of the fundamental responsibilities our founders entrusted to the federal government.

"It's a core obligation of the Commander-in-Chief.

"Yet, to a deadly degree, a parade of mistakes in Afghanistan tells us President Biden and his team have failed this most basic test of competence.

"For twenty years, the United States has successfully kept terrorists from staging another major attack on our homeland.

"Over the years, we have reduced our own military presence in Afghanistan, secured greater assistance from foreign partners, and supported local Afghan forces who did the vast majority of the fighting.

"This strategy kept Al Qaeda on the run. It kept the Taliban from taking control. And it kept Afghanistan from becoming a safe haven for terror.

"In only a matter of months, President Biden and his team squandered it all.

"The collapse we've witnessed wasn't inevitable. It didn't happen on its own. It happened because President Biden pulled the plug on our Afghan partners and pulled the rug out from under our allies who were with us in this shared fight.

"Everyone seems to realize this is a historic disaster for the United States except the President and his loyal retainers.

"Secretary Blinken points to the frantic evacuation of a hundred thousand desperate people as a huge success.

"Seriously? They initially didn't envision having to evacuate anyone. The number of people evacuated is not a metric of success for this Administration; it is a measure of their failure.

"Back in April, my colleague the Democratic Leader heaped praise on what he called President Biden's, quote, "careful and thought-out plan with a real timetable and a firm end date." End quote.

"Does he stand by his lavish praise for a careful and though-out plan? Crickets.

"Was it wise to conduct our retreat during the height of the fighting season?

"Was it sound strategy to preemptively abandon the strategic Bagram air base in the middle of the night without telling our partners?

"Was it careful and prudent to tie our departure to the 20th anniversary of September 11?

"Our botched retreat from a so-called endless war cost more American lives than nearly the prior two years combined. And make no mistake: the war against terror hasn't ended.

"In a rare moment of candor, the Biden Administration's own experts have admitted, explicitly, that we will face new terrorist threats from inside Afghanistan... sooner rather than later.

"We'll have to face a more entrenched and emboldened enemy with fewer resources, fewer friends, and more constraints.

"Mr. President, virtually every reason and advantage that President Biden said this policy would bring about has already proven false.

"This Administration said leaving Afghanistan would let us focus more resources on China. But its catastrophic retreat has tied up even more resources, including strategic naval assets from the Indo-Pacific.

"And while Administration officials are consumed with this catastrophe, China is cultivating deeper ties with the Taliban.

"This Administration told us our military and intelligence community could keep terrorists at bay with over-the-horizon capabilities.

"But longer distances, fewer assets, and less intelligence are already taking their toll and innocent civilians appear to be paying the price.

"Even still, the White House continues to peddle misleading comparisons with operations in other theaters, ignoring the unique challenges of keeping close eyes on a landlocked country with a hostile government thousands of miles from U.S. bases.

"Administration officials like to say there is no imminent threat posed by Al Qaeda emanating from Afghanistan. But their abandonment of Afghanistan has already allowed that threat to grow. And we will have fewer resources with which to confront this gathering threat.

"According to press reporting, just this morning, the deputy director of the CIA has acknowledged they're seeing Al Qaeda terrorists flowing back into Afghanistan and our intelligence capabilities are already diminished.

"But there is a larger pattern of broken promises.

"The President said everyone who wanted to get out would be able to do so, that we would leave no one behind. Instead, we left Americans and vulnerable Afghans behind.

"The Administration said we'd have tremendous leverage over the Taliban; that they would need international recognition and funding. Yet the Taliban doesn't seem terribly concerned with global PR.

"The Administration said they would hold the Taliban accountable. They haven't.

"The Administration seemed to believe the Taliban would establish an inclusive and representational government.

"We're talking about a government of medieval theocrats. The same killers, kidnappers, and hostage-takers who aided and abetted the terrorist architects of 9/11.

"Well, their government is inclusive in one way: It includes 4 of the Guantanamo Bay terrorists released by President Obama in exchange for Bowe Bergdahl.

"It also includes a senior Haqqani terrorist with a $5 million bounty on his head and American blood on his hands.

"This is not a government that cares about staying in the good graces of the so-called international community.

"The Biden Administration's conduct over the past several months demands thorough investigation by the Senate.

"That will begin with Secretary Blinken's hearing at the Foreign Relations Committee today.

"I hope the Secretary, and the Administration he represents, are prepared to answer some tough questions – about past decisions and future plans.

"The American people, and the vulnerable partners we've left behind, deserve nothing less."