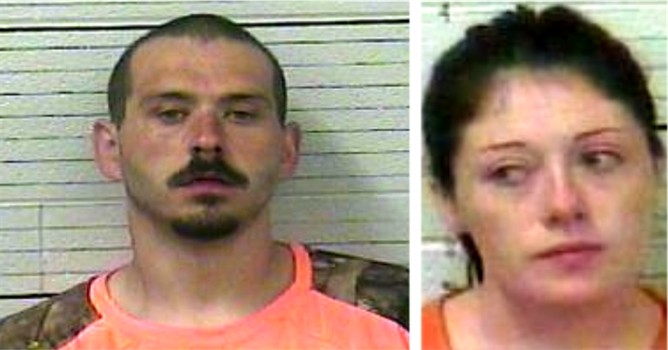 When Taylor saw Deputy Abner, he exited the truck and fled the area on foot running down Gobblers Knob Road toward South KY 11. He was apprehended after a short foot pursuit and a search incident to arrest revealed (2) two clear plastic baggies containing suspected Methamphetamine

Joshua Taylor was arrested and lodged in the Knox County Detention Center charged with;

Mr. Taylor was also served with four warrants for:

During the incident consent was asked for and given to search the vehicle which yielded (2) two clear plastic baggies containing suspected Methamphetamine.

One of the two baggies was in the purse of passenger, 26-year-old Brittany Cox, also of Bryants Store, which was in the floorboard where she had been seated.

The other was in a compartment in the dashboard near the radio.

Brittany Cox was charged with:

This individual was lodged in the Knox County Detention Center

Photo of the accused is from the Knox County, Ky. Sheriff's Department.