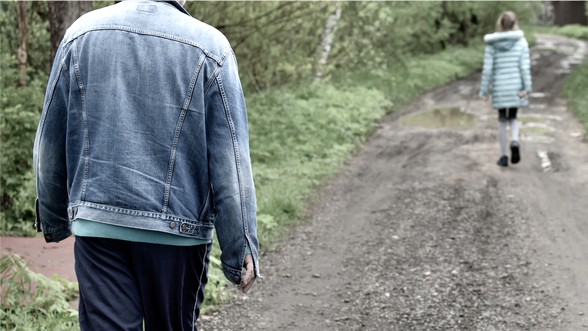 Stock photo: Young girl walking alone on a trail being followed by a strange man

LONDON, KY (July 19, 2022 - Laurel County Sheriff John Root is reporting that on Tuesday, July 19 at 3:52 P.M., the London-Laurel County Communications Center received a report of a possible "Attempted Kidnapping" on a trail near the Holly Bay Campground.

The investigation has revealed that a ten (10) year old female was walking on a trail when she was confronted by a male subject that grabbed her by the arms from behind and attempted to force her to go with him.

The victim was able to break free and ran to safety at the guard station.

The description of the male subject is:

Multiple law enforcement units from several agencies responded to the area in an attempt to locate this individual, however he could not be located.