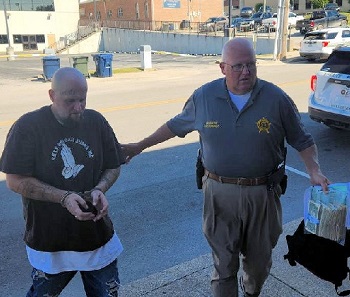 CORBIN MAN CHARGED AFTER ARMED BANK HEIST ON U.S. 25W IN LAUREL COUNTY, KENTUCKY WAS LOCATED, SURROUNDED AND CAPTURED AT A RESIDENCE IN KNOX COUNTY 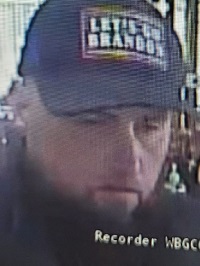 It was reported that a male suspect armed with a pistol had entered the bank demanding money and fled the scene with an undisclosed amount of money. Reportedly the suspect fled in a red colored Honda Civic.

A short time later information was developed that the suspect had changed clothing and ditched the red Honda for a red colored Ford F-150 pickup.

Area law enforcement officers were able to develop a possible suspect due to excellent video surveillance from the bank.

The suspect pictured (left) was posted on the Laurel County Sheriff's office app along with a Facebook post to the Laurel Sheriff's Office Page, and information sent to regional news outlets.

As area law enforcement officers continued to search for the vehicle, Knox County Sheriff Mike Smith located the possible suspect vehicle behind a residence on Moore Hill Road (near Corbin) in the edge of Knox County.

Knox County EMS was summoned to standby nearby.

The suspect was taken into custody and transported to the Laurel County Sheriff's office to be interviewed by Laurel Sheriff's investigators and the FBI. 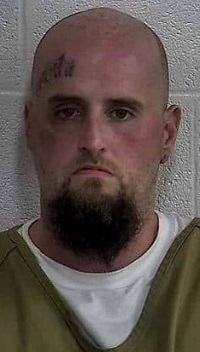 Shawn Fox (right) was charged with:

This individual has been lodged in the Laurel County Correctional Center.

Mugshot photo courtesy of the the Laurel County Correctional Center.

All other photos from the Laurel County Sheriff’s Office.

Money and a pistol have been recovered.

The local office of the FBI.

ARRESTED: Vehicle located and Suspect taken into Custody two Hours after Robbery of a Bank in Laurel County, Kentucky