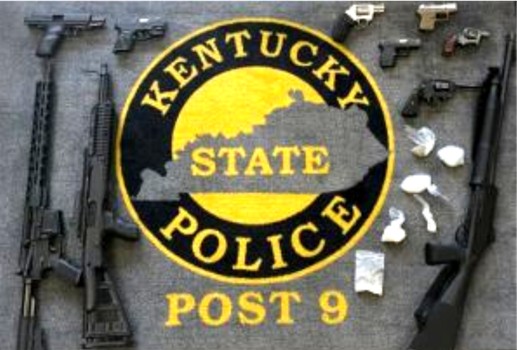 PIKEVILLE, KY (June 4, 2022) – The Kentucky State Police reported on Thursday that several subjects were arrested Wednesday evening after illegal drugs and stolen items were discovered at a Pike County home.

Through investigation, detectives and troopers with Kentucky State Police Post 9 executed a search warrant at a residence on Flora Street in the Coal Run community of Pike County.

The investigation began on Monday, May 30, 2022, when KSP Post 9 security cameras captured occupants from the residence stealing from State Police property.

While conducting a search of the home, troopers located stolen items and seized quantities of suspected Methamphetamine.

The theft investigation led KSP detectives to another residence in the Tram community of Floyd County. There, detectives located and seized several firearms, quantities of suspected Methamphetamine, Heroin, and Marijuana.

Additionally, prescription medication, drug paraphernalia, and over $1,600 in cash were seized from the residence.

The arrested individuals were identified as:

Timothy Cecil was charged with:

Aaron Caines was charged with:

Tessa Belcher was charged with:

Rebecca Cecil, 38, of Pikeville was charged with:

Joshua Habern was arrested on:

These individuals were all lodged the Pike County Detention Center.

Additional charges from this investigation are still pending.