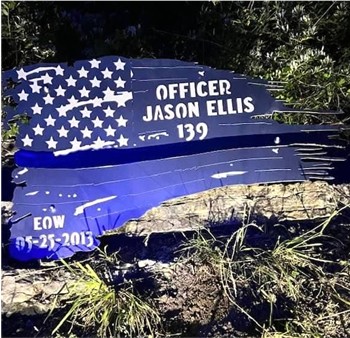 KILLER STILL "AT LARGE": Vandalized Memorial of Bardstown, Kentucky K-9 Police Officer that was Ambushed & Murdered in 2013 on a Bluegrass Parkway exit Ramp in Nelson County

BARDSTOWN, KY - The Bardstown Police Department is reporting that: We are looking for the public's help regarding theft and vandalism of the memorial area for Officer Jason Ellis on exit 34 of the Bluegrass Parkway in Bardstown, Kentucky.

Sometime between Sunday, October 9th and Thursday, October 13th, a person or persons removed a metal memorial flag and damaged property at this location.

This was a deliberate, calculated theft as the flag was bolted to a metal fastener and anchored into the rock. This is yet another blow to Jason's family and our community as a whole.

If you have any information regarding this theft or saw anything unusual at this location during that time, please call the Nelson County Sheriff's Office. @ 502 348 1840.

UPDATE: The reward is now $1500.00 (KY COPS adding $500) - The Bardstown/Nelson County My Old Kentucky Home FOP Lodge 43 has posted a $1,000 REWARD for information leading to the arrest and conviction of the person or persons responsible.

Bardstown Police Department: It’s ludicrous that this has even happened. If you know anything or saw anything, do not hesitate to reach out to the Nelson County Sheriff’s Office at 502-348-1840 or Nelson County Dispatch at 502-348-3211.

NELSON COUNTY, KY - The Federal Bureau of Investigation (FBI) is reporting that on May 25 2013, Officer Jason Ellis was killed after finishing his shift for the Bardstown, Kentucky Police Department.  Ellis had signed off on the radio and was driving home when he encountered branches blocking the road on exit 34 of the Bluegrass Parkway in Bardstown, Kentucky.  To ensure the safety of the public, he got out of his vehicle to clear the branches.

While attempting to remove the debris, he was  shot several times and died shortly after. 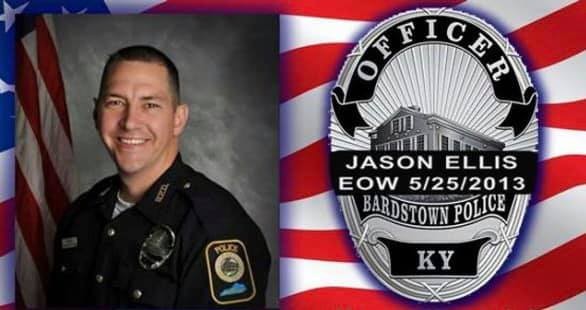 He was a K-9 handler (narcotics dog) for the police department in addition to his patrol duties. Outside of work, he was heavily involved in the community including coaching youth baseball.

The FBI is offering a reward of up to $50,000 for information leading to the identification, arrest and conviction of the individual(s) responsible for the death of Bardstown, Kentucky Police Officer Jason Ellis.

If you have information concerning this case, please call 1-800-CALLFBI.

You may also contact your local FBI office, or the nearest American Embassy or Consulate.